THE MPLS ALTERNATIVES TELCOS DON’T WANT YOU TO KNOW 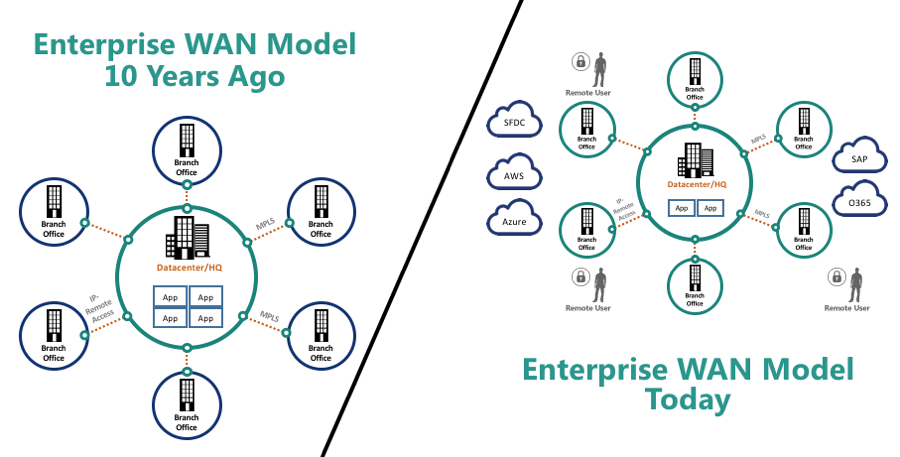 MPLS is entering its sunset, and yet telcos aren’t ready to let you go. Rather than see you invest a few more years in a legacy technology that needs to be retrofitted with WAN Optimization, SD-WAN, and more, we held a webinar to discuss your alternatives.

We were joined by Jim Metzler, Founder and Vice President of Ashton, Metzler, and Associates, along with Yohan Beghein, System Integration Manager at Skullcandy, to discuss how network admins like you can optimize the enterprise WAN without turning back to MPLS.

Here are the key takeaways from the webinar. You can access the complete webinar here.

THE REALITY OF MODERN NETWORKING

One of the biggest concerns for any IT team can be summed up in one single image, as shown in the diagram above. The happy days of a simplified, traditional “hub and spoke” model of branch office connectivity (shown on the left) are, unfortunately, over. The current IT landscape is more complex than ever, and IT teams find themselves responsible for not just the users at branch offices, but also an influx of remote users, an eclectic mix of applications and delivery models (both on-premise and Cloud/SaaS applications), and myriad devices.

Metzler described how most of his clients are facing intensified global pressure from organizations whose business models now completely rely on IT to gain a competitive edge, capture new markets quickly, and provide customers with fast and reliable service. The CIOs are expected to deliver these results while dealing with a lack of IT resources and keeping costs low.

As the IT landscape becomes more complex and the cost and time taken to run and maintain the systems skyrockets, this snowballs into a mammoth task for the IT leaders and their teams.

It is then of little surprise that when Metzler polled the webinar attendees about the top factors that will drive changes in the enterprise WAN, a staggering 47% chose the “need to reduce cost” as a primary driver. An additional 29% chose “increasing security and improving performance for real time applications,” and 26% and 24% chose “better access to cloud” and “increasing availability” respectively.


MPLS: THE DEATH OF A GIANT

One of the fundamental problems in the enterprise WAN space today is that, while IT and business have undergone a 180-degree change in the last two decades, there has been negligible innovation in the networking fundamentals. As a result, 66% of IT executives today are not/or only moderately happy with their WAN architecture, as Metzler explained.

MPLS made a massive commercial debut in the early 2000s and became the gold standard for connectivity. The problem is that MPLS was not built to handle the cloud intensive, demanding workloads of today.

While MPLS did its fair bit in providing a reliable connectivity to global enterprises, it is clear now that it can hardly match up to the current connectivity demands.

For example, MPLS is slow to deploy, as it can take months or even years to set up a new link. The results of another poll during the webinar confirmed that this is a top concern for IT executives.

The poll also revealed that complexity and accessing cloud and SaaS applications were the second and third concerns on IT executives’ minds regarding MPLS. All of these concerns can be addressed by bypassing MPLS and using the public Internet, but the Internet cannot be trusted for critical enterprise traffic due to high latency, congestion, and security concerns.

In a world where most global organizations are adopting a cloud-first approach, MPLS is poised to become irrelevant soon. The reasons are manifold: few cloud/SaaS vendors have MPLS connectivity options and most MPLS vendors do not own cloud/SaaS vendor infrastructure or provide support for applications hosted in the cloud.

Most global companies today are feeling the pressure to find a suitable alternative to MPLS and the Internet. What they need is an enterprise-grade connectivity solution that is intelligent, secure, quick to deploy, cloud-ready, and cost effective.

To emphasize the importance of rethinking the WAN strategy and the benefits it can bring to the enterprise, Metzler then invited Yohan Beghein, System Integration Manager at Skullcandy to share a case study. Beghein discussed how Skullcandy, one of the global brand names for high-quality headphones, earphones, Bluetooth speakers, and related accessories, replaced their MPLS circuits with Aryaka’s global SD-WAN to connect offices in the United States, Canada, Germany, China, and Japan.

Beghien explained how Skullcandy was facing a challenge that many organizations across the world deal with: a spike in enterprise bandwidth requirements during the winter holiday season. The company was facing latency and application performance issues over MPLS in Germany, China, and Japan. Executive teams across different regions around the world could not collaborate effectively, as their telepresence solution was unable to keep up with the high latencies. Moreover, MPLS bandwidth was prohibitively expensive, and it took “forever” to scale up or down.

Skullcandy realized that they needed to move beyond the conventional solutions to a more flexible and reliable connectivity solution. By choosing a cloud-ready SD-WAN solution, Skullcandy could achieve up to 10x better application performance improvement, 93% data reduction across all applications, and about 40 Mbps peak bandwidth savings. Read the full Skullcandy case study to learn more.

In recent years, SD-WAN emerged as the saving grace for most enterprises grappling with connectivity issues. However, not all SD-WANs can provide a complete replacement for MPLS.

When evaluating SD-WANs, you should look for a holistic solution that provides:

Alternatives to MPLS pricing without sacrificing QoS or security

End-to-end visibility and holistic control of the entire network

Metzler ended the webinar with a call to action for global enterprises struggling with connectivity issues: He suggested that companies need to start evaluating and write down the key challenges that might mean it’s time to re-evaluate the enterprise WAN. CIOs and IT leaders need to start weighing out alternative WAN solutions with a focus on whether their solution can truly respond to those key challenges and support their global operations. Most IT teams need a solution that can help them reduce or avoid complexity and relieve the team by providing support in the form of managed services.

Please fill in your info:

Internet Binat is an excellent company with great products and outstanding support.The Network and Security Solutions supported by them are resilient, user friendly, secured with a low and affordable cost.Their support team always gives us high priority and attention

Erez Greenbaum
08:11 10 Sep 19
I am working side by side with Binat an several years, and was constantly amazed with their business insight and brilliant ways to solving problems.We was setup more the 15 MPLS line for our business around the world, which gave the company a significant advantage on top of the competitors.I really hope that our paths will not diverge in the future, and would recommend with all my heart working with Binat Internet and take advantage of their incredible and rare qualities.

Alex Levin
14:27 19 Aug 19
Internet Binat is at the top of WAN services.Adama is working very closely with them for the last couple of years in some very challenging parts of the globe.Without the solutions they provide our job and normal user's productivity around the world would not have been possible.They are professional, committed and above all give superb service !Internet Binat can take you from planning board to execution with flying colors. Strongly recommend👍

Roni Barzelai
13:46 19 Aug 19
We get the absolute pleasure of working with Binat Internet for the last 5 years.We are worked on challenging and innovative projects on a global scale.I believe that every organization that would work or interact with Binat Internet will benefit dramatically from that. I want to note the excellent technical round-the-clock support, especially the Israeli team. Team is ready to deal with difficult situations and solve the problems on time.Any of your problems will be solved ASAP.Will be happy to recommend Binat Internet every time, knowing the benefits and attitude they are bringing with them to every project.

Valery Kucher
11:32 18 Aug 19
The excellent company,High professional levelYou always can trust the technical people that help you in any situation.